Zombies are all the rage these days. It seems like we can’t throw a stone without hitting some form of zombified media. Techland is one of the many developers that’s caught an affinity for the undead genre. As you probably know the company released a game, “Dead Island,” a few years back. Dead Island took players to a beautiful vacation spot devastated by an undead plague. 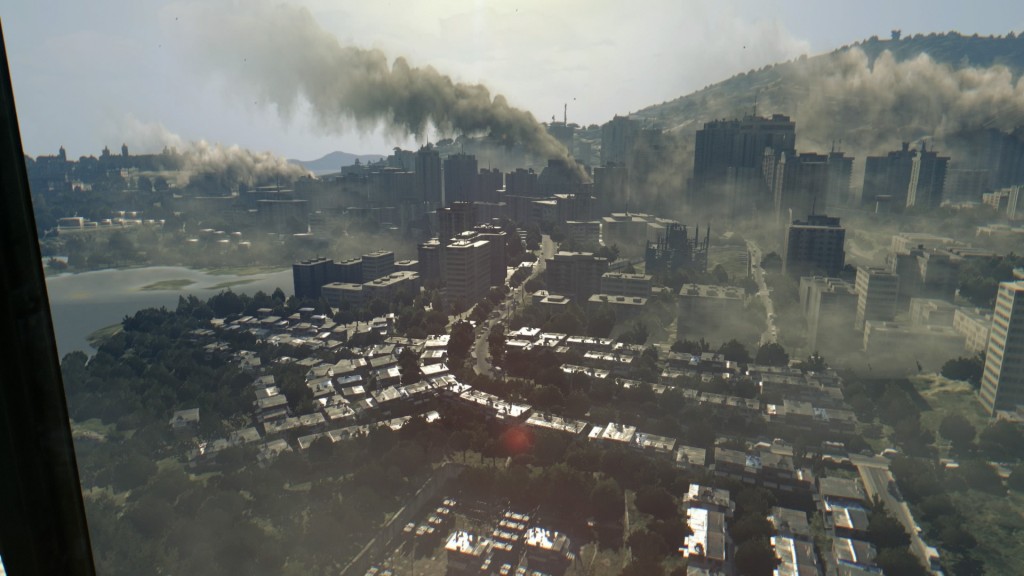 The game received some mixed reviews. Some loved it, others hated it. Personally, I found myself in the latter group. While the premise of Dying Light excited me, the previous experiences with Techland’s made me a bit apprehensive. The Zombie genre is pretty saturated these days and Techland’s last foray into it left quite a bit to be desired when all was said and done.

Dying Light is a vast improvement to what was a similar concept used for Dead Island. While the games’ structure is very simple, amounting little more than scavenge, run, fight and survive. These basic concepts come together to make quite a fun and in-depth experience. Dying Light’s atmosphere plays a big part in the games’ morbid charm as well. Often not going for the quick and easy “jump” scare, but painting the entire scenario to feel like nowhere is safe and survivors must always be on their toes. The audio portion of the game adds quite a bit to the atmosphere as well, going from almost silent to deafening screams in a moment. Music ramps up during intense sequences and is practically non-existent in moments of serene calm where players are free to take in the view and enjoy the beauty of the chaos and wreckage.

The City of Harran is littered with the undead and living alike. Harran has a very “lived in” feeling, giving players the feeling that things are constantly happening whether they are there to witness it or not. Techland did a great job with level design and layout. Different sections of the game has a variety of architecture, building sizes and terrain that adds for a nice change of pace. The city looks like everything came to a violent, grinding halt. From the abandon cars scattered across the landscape to the half closed up homes and businesses. There is a feeling that many people left their entire lives in the streets, whether they escaped or died where they stood. This environment brings a foreboding weight with it; a sense that Harran is living on borrowed time from the moment our protagonist, Kyle Crane arrives in the doomed city.

The entire atmosphere of the city will put players on edge or make them feel outright terrified at times. The undertones of players not being safe anywhere is seemingly a constant theme in the game. Even in safe zones where the undead will sometimes literally wait outside for players to leave. Many safe zones that have yet to be unlocked are full of the undead, giving the feeling that one slip up could cause a haven to become a penned-in nightmare. Thankfully this doesn’t happen and is only used for affect when unlocking safe areas. Once players take a zone it remains safe for the rest of the game. The fact that it wasn’t safe when players found it. With the undead often only feet away makes for a very uncomfortable and claustrophobic environment.

Players can do quite a bit to improve their situation throughout the game. Like scavenging for new weapons, crafting upgrades and modifications to weapons to deal with the undead threat. These opportunities come with an inherent risk to them however. These risks can range from from an almost unlikely chance Crane will be snagged by a zombie, to almost certain death. Gathering the weapons and crafting items the players need take time and it’s very easy for a zombie (or ten) to wander over while players are distracted. It’s easy for the player’s attention to change when picking locks or scavenging an area, forgetting to check the radar or to glance away from a task every once in awhile can lead to disaster. While one zombie is unlikely to drag a player down, a group can make quick work of even a high level player. There are very few occasions where players will feel more vulnerable then when they’re trying to crack a lock. The risk vs. reward scenarios give the game a great balance and delivers a feeling of accomplishment for cracking into the back of a police van or opening a chest in an area that players have had to painstakingly clear out. 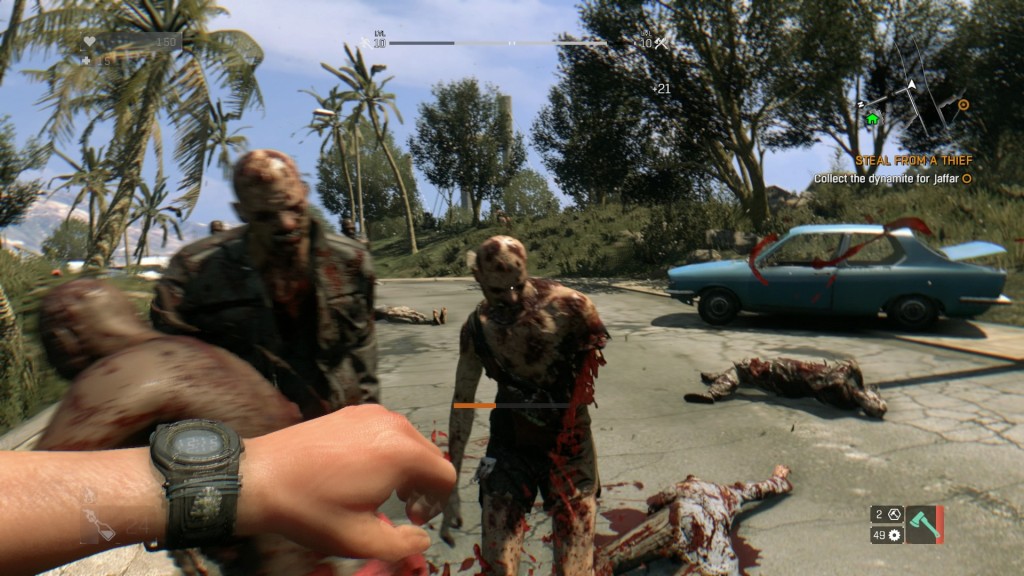 Dying Light’s combat system is a simple but effective design choice. The closest comparisons that comes to mind would be “Zombiu” on the Wii-U. There is however a much more calculated feeling to it. Combat requires players to try and plan out their attacks, engaging when it suits them and singling out enemies from one another. Hopping into a group of zombies and swinging wildly is a terrible plan. Even at higher levels characters are vulnerable to groups of slow, “regular” zombies. Combat is grueling, but in a good way. Killing zombies is no simple task and players may be both horrified and amazed at the amount of punishment one zombie can take. Not much is left up to the imagination in combat either. Limbs, heads an chunks of torsos being severed or crushed in is a common sight, there is some real weight to the combat. The sense that you’re cutting into another human body is very real and as fun as it is disgusting.  Players will eventually find guns too, however these come with their own problems. All the zombies have an acute response to noise. If players aren’t careful they can make a bad situation worse by popping off a few shots or lobbing a grenade into a crowd of walkers. The option of whether to stand and fight or hightail it to the nearest roof is a question players will find themselves asking at every corner. While Crane has some excellent mobility, he does get tired and needs to take a breather from time-to-time. What players decide to do heavily weighs on what time of day it is.

As the sun dips lower there are reminders that players will need to contest with some much more frightening and aggressive creatures. The reality is you simply do not want to get caught out at night alone for a very long time. Even at higher levels players don’t stand a chance against Nightmares of even a group of determined Volatiles. Once the sun is down the best option available is to book it to the closest safe house. Dying Light certainly rewards players handsomely with experience for surviving the night. Crane can earn a massive amount of experience for any of the three upgradable skill tiers, which revolve around Agility, Survival and Combat, often the nights you venture out of the safety of the camp can heavily affect Crane’s equipment. It’s easy to burn through medkits, w 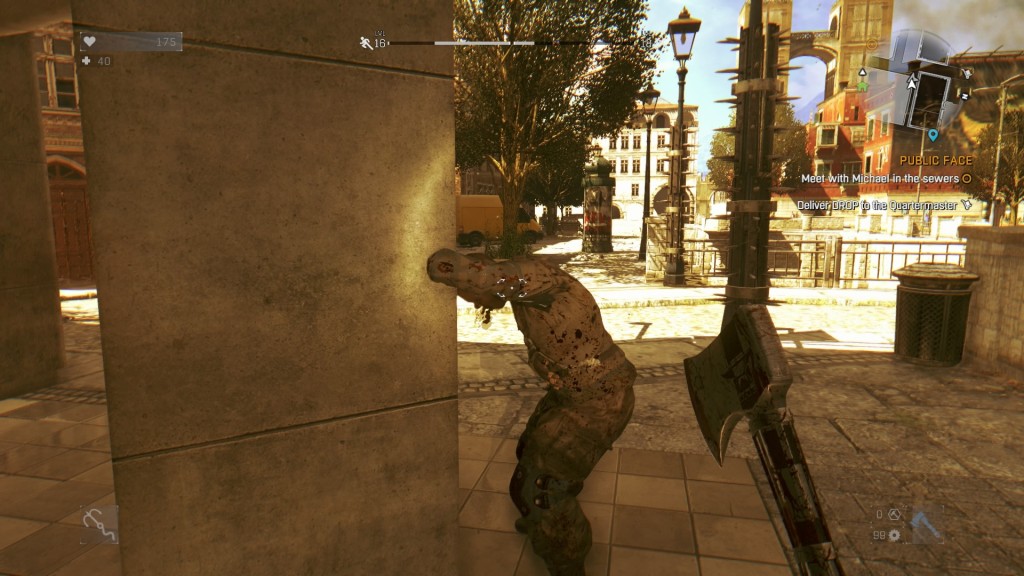 eapons and explosives while dealing with the seemingly endless hordes that shamble out of the darkness.

As fun as it is to play alone, Dying Light really stands out when with a group. The game thrives on teamwork and cooperation with one another. Venturing out at night is a feasible option with a good companion and the way two players can assist one another in combat is not only affective, but incredibly entertaining. There are many laughable moments where a friend comes flying in from the boundaries of your screen only to dropkick a zombie off a roof, plunging to its (re)death. Certain zombie-types also get much easier to fight and deal with if you’ve got a friend. There can be a maximum of four characters in one game at a time, which really ramps up the action and can help to bring the monsters out of the woodwork. It can be as helpful as it is a hindrance though. Players will most likely want to pick their companions carefully as a bad team member can drastically and negatively affect the experience. This is however the case with many cooperative games, but just something to keep in mind while looking for someone to play with.

Dying Light isn’t perfect, but I was hard-pressed to find bugs that drastically and negatively affected the game. There are a few odd clipping bugs where a zombie will appear inside of the building, when really it’s scaling the building from the outside. Some other bugs that have cropped up are weapons that cannot be repaired until the player switches to one, then switches back. Zombies will also sometimes get stuck in between objects littering the street, though usually not for long. If anything a lot of these bugs are a welcome chuckle in a game with such a heavy atmosphere and setting. Nothing stands out as a glaringly obvious failure and overall Dying Light feels very polished.

The story itself isn’t bad, a bit of a classic zombie “standard” we’re used to seeing in gaming, but it’s a good one. Some of the characters you interact with in the game are pretty drab though. Crane forms bonds with these people that players may find themselves feeling pretty neutral about. You don’t hate them, you don’t love them and sometimes they just feel like they’re there to progress the story. They do the job, but you may wish they did more than the bare minimum. Some of these characters aren’t without their charms though. Rais, the games’ antagonist is a fun guy to deal with that reminds me a bit of Vaas from Far Cry 3 and totally off-the-wall drug lords like Pablo Escobar. The worst that can really be said is, “Hey, sometimes you’re just not going to connect with these characters all that well.” The rest of the games’ strengths more than make up for any of its short comings. In a game about bashing in the heads of zombies, players may not even really put much stock in the relationships Crane forms with other characters.

Dying Light is a great adventure across a dying city full of people who are already dead. Techland knocked this zombie head out of the part as far as I am concerned and delivers a game with the right balance of difficulty, flexibility, fun and fright. If you were a fan of Dead Island you’ll most likely enjoy this free-running action horror game. Even if you weren’t a fan of Dead Island this game is worth checking out. There is plenty of content to keep a player busy for hours and for many is well worth the money. Dying Light is what Dead Island should have been and more in all the right ways.