Avalanche Studios and Square Enix are back to continue their destructive love affair. The high-flying and explosive continuation of a franchise, ‘Just Cause 3’ is the post-child for mayhem and chaos looks to up the ante with the latest release. Players can look forward to strapping the boots of Rico Rodriguez again, as they run and gun their way through Rico’s home, Medici. We’ll be taking a look at some of the additions to the game, how it plays, looks and how it stacks up to it’s predecessor in varying ways. Just Cause 3 has had quite a few PC gamers waiting patiently for it, but does it stack up to what we saw before and does it stay true to the ‘Just Cause’ franchise? 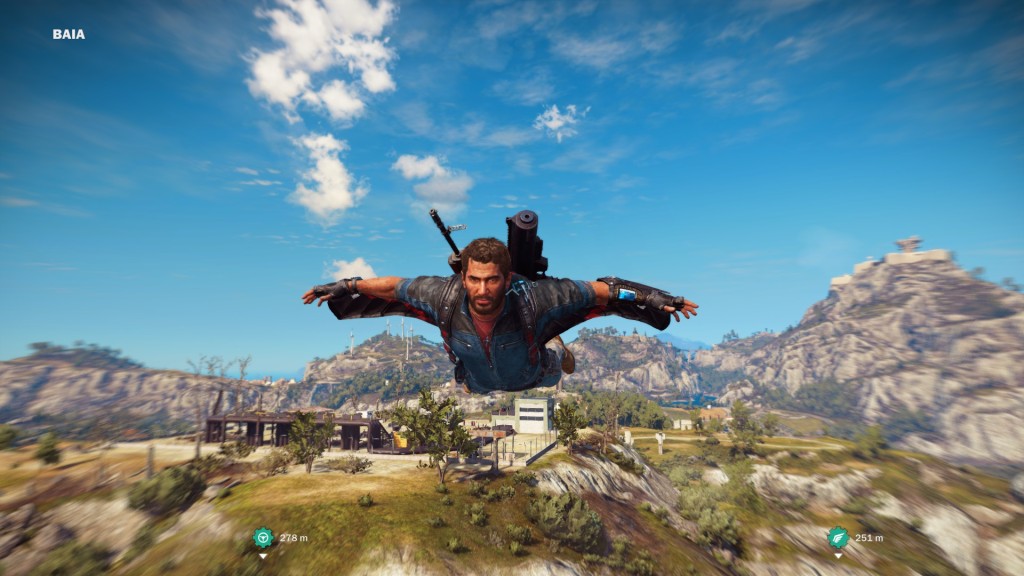 One of the first noticeable improvements to the ‘Just Cause’ series is the voice acting in the latest game. Without really mincing any words, Just Cause 2 was terrible in this regard. It was so bad in fact, that it could be distracting and in a weird way was one of the reasons to actually play it. There is one rebel in particular from the second game that comes to mind. Her name, ‘Bolo Santosi.’ This infamous character’s accent landed somewhere between South American and African in varying degrees. The voice actress also seemed to deliver the emphasis of every sentence on just about all of the totally wrong words. Suddenly, the overly serious nature of the game is comical. The dialogue of JC2 was funny in a way that a bad movie ends up being rifted on, like Mystery Science Theatre 3000. Thankfully that’s something we don’t have worry about in Just Cause 3. Yes the voice acting is much better, but the game also hits the mark well. JC3 strikes a happy medium between serious and comic dialogue, balancing a relatively serious plot direction of a violent civil war and just outright ridiculous action and devastation on a scale that would send your average populous running for the boarders.

Avalanche Studios has embraced all of the ridiculousness that embodies a game like this. The supporting characters, like Mario, Rico’s best friend is always cracking jokes. 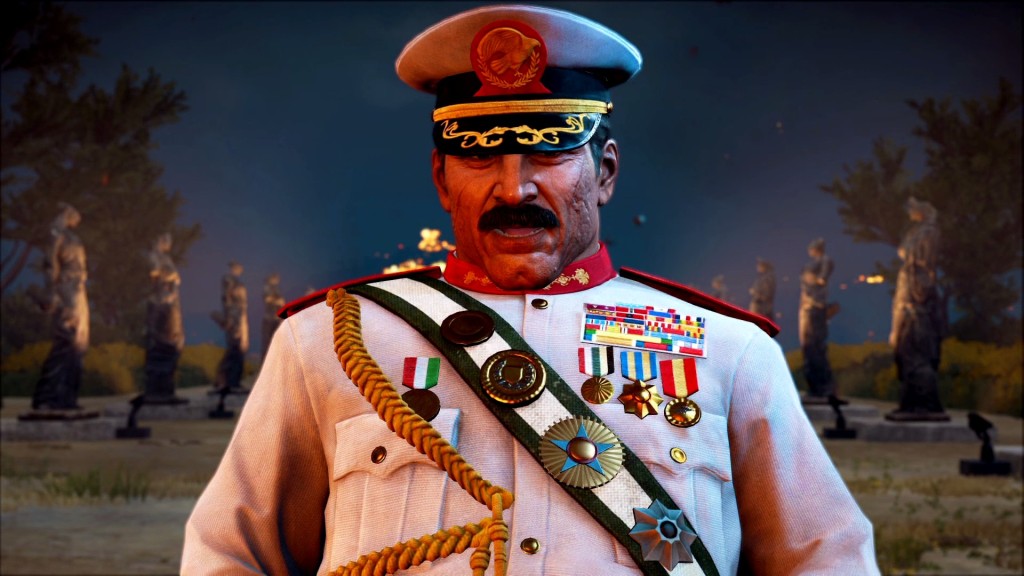 There is an odd juvenile machismo between the two that actually comes across as quite endearing. While you shouldn’t expect a classic, heart-warming tale told from these two, it is nonetheless refreshing, especially when compared with JC2. There is plenty of banter that bounces between Rico and his NPC friends throughout the game that just feels natural. With plenty of other little touches during cutscenes that add to the game’s’ almost cartoon-like approach to mass-murder and destruction, this is a definite improvement from previous titles in the franchise. Somewhat surprisingly, JC3 is an incredibly lighthearted and playful game which does wonders for it’s pacing. These interactions between characters slows the game down down, which isn’t a bad thing with the almost non-stop action. The more easy going, fun-loving Rico is a nice touch to the high-stress, deadly serious ‘Scorpio’ from JC2.

For the most part, core game mechanics in JC3 are largely unchanged from the previous title in the series. There are a few added options, like a wingsuit and some new mines to play with that make for a nice addition. It’s always good to have a few more options right? The biggest addition to JC3 is the ability to tether targets and objects together with Rico’s grappling hook. This flexible new tool adds the most function in the game and is frankly a blast to just play around with. Instead of simply using it as a way to get around an area quickly, now it’s an offensive weapon that can be used to tear down target objectives, pull helicopters from the sky and even turn an unwitting enemy soldier into a human rocket by attaching him to a tank of flammable gas. The newly updated grappling-hook system coupled with the wingsuit adds to Rico’s mobility as well. Most of us will remember pulling ourselves around with the parachute deployed, while grappling to the ground for leverage. The same thing can be done in JC3, except now players can use the wingsuit and can now is a snappy way to get around. I’ve found it to be my preferred form of transportation so far. 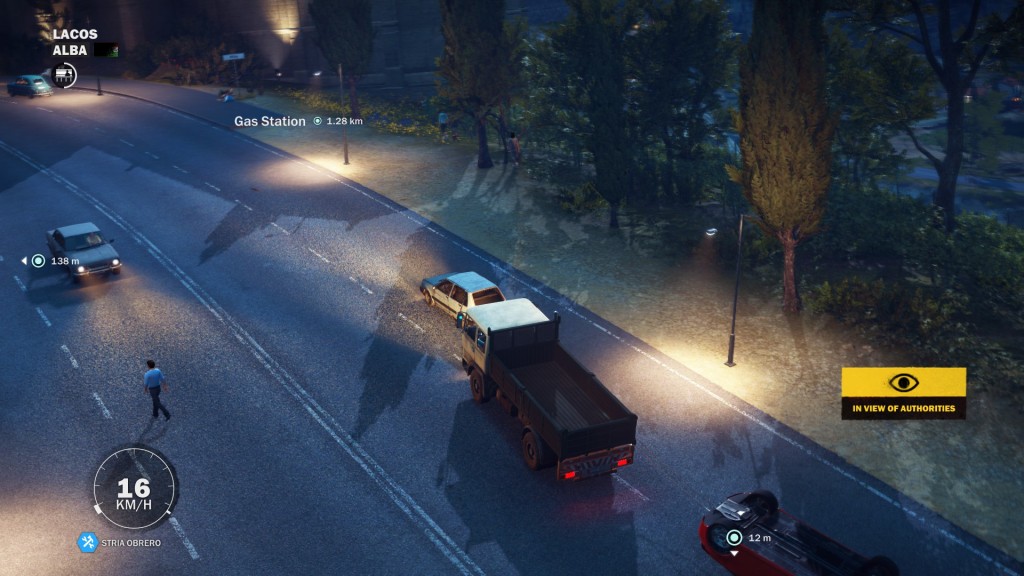 Unfortunately driving hasn’t really had too much an improvement from JC2 to the latest game. Most vehicles feel incredibly stiff and difficult to maneuver, especially if you happen to be using a keyboard to play rather than the controller. Vehicles feel somewhat unresponsive when trying to turn and stop, resulting in plenty of accidents and possibly even comedic deaths for Rico. You would expect High-end sports cars to have tight, precise fell, however they tend to feel more like rocket propelled piece of lumber with wheels attached to them. While the driving controls did seem a little better with a controller, comparing this to other open-world games like “GTA” or even “Watch Dogs” that have a similar amount of driving, there is quite a lot to be desired in JC3 that just doesn’t seem to be there.

Just like JC2 however, JC3 shines with all of the destruction and havoc that can be unleashed on just about every corner of this small island nation. Weapons are introduced almost immediately to the player that allows them to unleash a healthy amount of destruction on both Rico‘s enemies as well as his surroundings. There’s bound to be collateral damage, but unlike most games that make players feel like they’ve done something wrong, this game just goes with it. Cars, people, bus stops or just random shit on the side of the road. All of it is fair game and just adds to the feeling of being able to raze just about everything you see. In a somewhat fashion however, just about all buildings can take a punishing blast from heavy weapons or tanks without even so much as a scratch. While the level of destruction is indeed vast, it does have its limits. 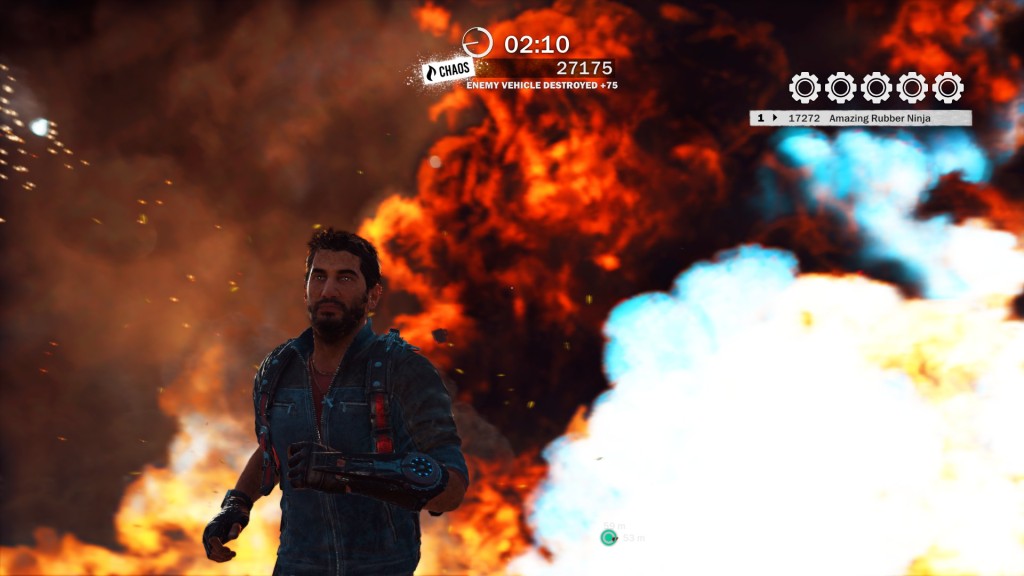 The game’s stunning location with a mixture of bright and colorful surrounds really makes JC3’s visuals something to enjoy. The mountains and rolling hills on the islands are broken up by small towns, villas and of course strategically placed military bases. No matter where you end up with Rico, it feel like you’re never too far away from something the players can interact with or simply look at and admire. The game has fields full of red flowers that have a nice, serene look to them, that fits right in. These stunning sections of the game also help tp balance the constant intensity of the game. There’s also sprawling fields of sunflowers that are just as nice to  look at. Players have the added bonus of being able to drive through the fields full-bore, cutting a haphazard path to whatever exits they choose to make. The Mediterranean beaches and ocean water look amazing, with waves gently washing up over the nearly golden sand. It’s really a pleasure to be tearing through this surreal location and even with all the havoc players release on this game’s setting, it never stops looking beautiful. Just about every spot seems to make for some great screenshot opportunity whether you’re standing calmly, looking out over the ocean or blasting a military base to smithereens.

Just Cause 3 is not all roses and sunflowers though. The elephant in the room that is Just Cause 3 is its repetition. The same thing that makes the game enjoyable in the short term may be something gamers tire of quickly. You may find yourself blasting the everloving shit out of an enemy compound only to unlock a “frenzy” mission where you have to use a specific weapon to blow the shit out of it all over again. It’s not too bad the first few times, but after awhile it does start to get a pretty old. 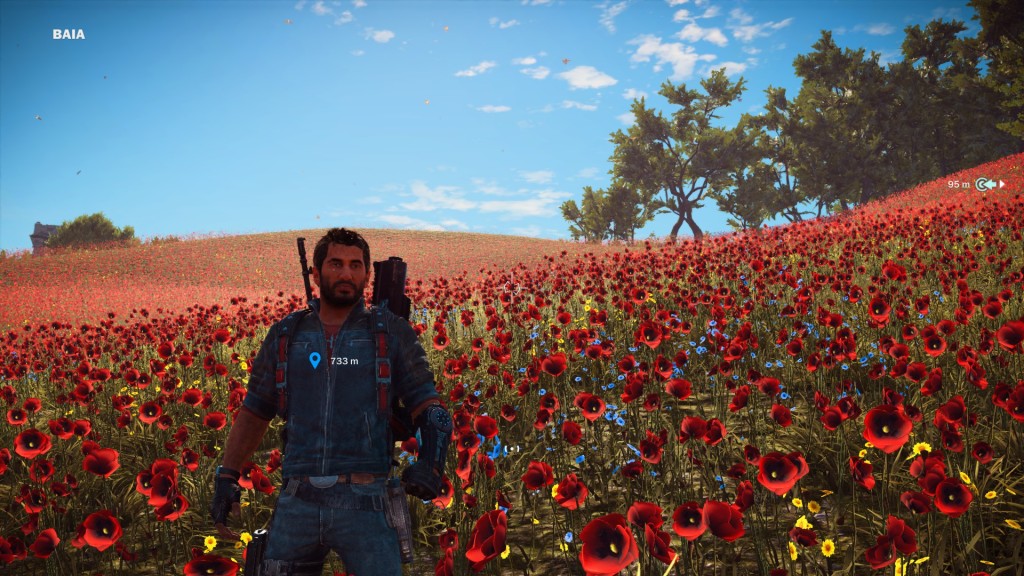 A lot of the non-story driven missions have players jumping through hoops, literally. If you’re not gliding through the air on your wingsuit, your driving or piloting something through the very same hoops. Not only does this get boring quickly, it feels like the game’s environments go wildly underutilized. While the main story missions are pretty well developed, all the extras that would keep players coming back tend to just drag on. There are only so many circles you can fly through and fortresses you can blow up multiple times before the repetition becomes wearing. The fast-paced combat and all the pretty explosions can’t mask this problem of ad nauseum that Just Cause 3 suffers from. This is unfortunately the biggest problem with the game, it’s same strengths are focused on so heavily that it’s hard to keep up for long without it losing at least some of its appeal. While I can’t say that it goes far enough to get completely boring, it does lose a lot of its satisfaction as the game goes on. With such a wide area to cover, it’s really too bad since most players will start noticing these repetitive tasks before they’re even off the first island. There are a few side missions that are pretty entertaining, but they don’t come up too terribly often. It may be why these sparse mission-types so fun to being with. Without having a wider variety of missions available it may be difficult for some gamers with less time or shorter attention spans to commit to JC3 for any extended period of time. 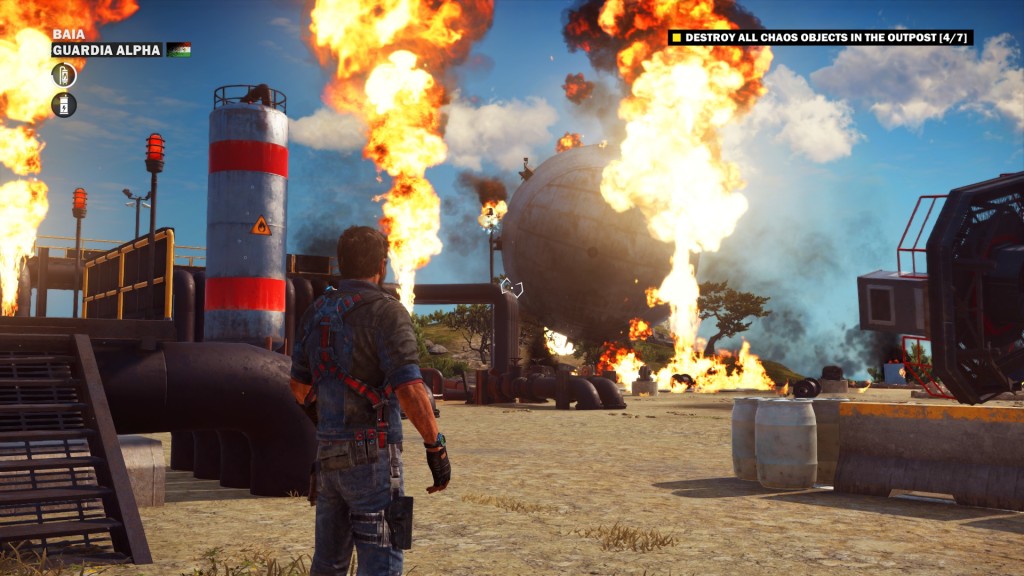 JC3 really isn’t going to turn many heads with new features, but it’s a good addition to the Just Cause family. The game does more than a few things right, and Avalanche Studios has made quite a few subtle improvements that have a positive effect on the game and it’s playability. Unfortunately in some cases it may not be quite enough for someone who is looking for an open-world game that does things differently. With games like Metal Gear Solid 5 and Grand Theft Auto 5 that are available on the PC, there is some stiff competition for gamers who may not have made their way through these other games yet. JC3’s focus also makes it the title’s weakness in the long term and at some point players may be asking themselves if it’s really worth continuing. If you’re someone who has any reservations about a game like this, get distracted easily or are short on that cold hard cash, then I’d wait on the latest Just Cause. If you’re one of the many gamers that don’t find repetitive tasks too troublesome and you’re looking for a reason to blow some cash while blowing up half of a small, fictitious country then look no further. Otherwise, wait patiently. The game is worth playing, but maybe not at it’s $60.00 price-point for now. It is a beautiful game, but ultimately the world does feel woefully under-utilized and that’s hard to look passed.