Destiny has been a curious game to watch after it’s release. During it’s testing phases where public had access to it, the game was almost universally loved. After it’s release though, there were quite a few reviews that were favorable, but only slightly. Though there have been some patches, changes and specialized events in Destiny it seems to really be struggling to keep playings interested in the way that Activision and Bungie were hoping for. There are quite a few gamers who feel like they’ve fallen for the old “bait and switch,” tactic. When it comes to Destiny, looking back at what was promised versus what was delivered seems to be two very different things.

Destiny sold fairly well, especially in it’s first week of release. While the game was a marketing success both Bungie and Activison recently came out to say they were “disappointed” by their sales numbers. Both companies seemed to expect the game to have sold even better than it did. With the amount of money spent in developing the game and all time and effort put into marketing it must have been a bit discouraging seeing the mixed reviews from critics and gamers alike, but the problem doesn’t lie in the fact that gamers weren’t interested in Destiny. The problem was that the game consumers were promised and the version that was delivered were two entirely different products. This is a sentiment that’s caught on like wildfire in the gaming community and it’s definitely affected sales of the game moving forward.

It’s not that Destiny is a terrible game in the form it was released in, not at all. It’s a competent a game that at it’s core was a good shooter, unfortunately that’s really all it has going for it. The problem seems to be everything around those core mechanics just isn’t appealing for the long term. The world that the player is a part of is like a painting. It looks beautiful and serene, but it’s a static environment. Characters exist in it, but they have no real lasting affect on it. A game that was marketed to players as a dynamic experience, where characters have choice, a feeling of power and influence over the universe just doesn’t have those aspects in it. Realizing  that at level 1 an area will be exactly the same as level 30 after all that time and effort doesn’t give players a sense of control or affect. In many cases it causes the exact opposite feelings in gamers, as players have seen. Gamers are no longer content with their characters just existing in the same, static world, killing the same enemies respawning repeatedly with no change. In a somewhat ironic turn of events, the design choices made Destiny into such a static and repetitive experience that it inadvertently reflects the sentiment of some of the characters in the game, that no matter how hard humanity fights, they are doomed to lose and no matter what the Guardians do they can’t save the universe. Which is what it sort of feels like when the player actually finishes the main story. 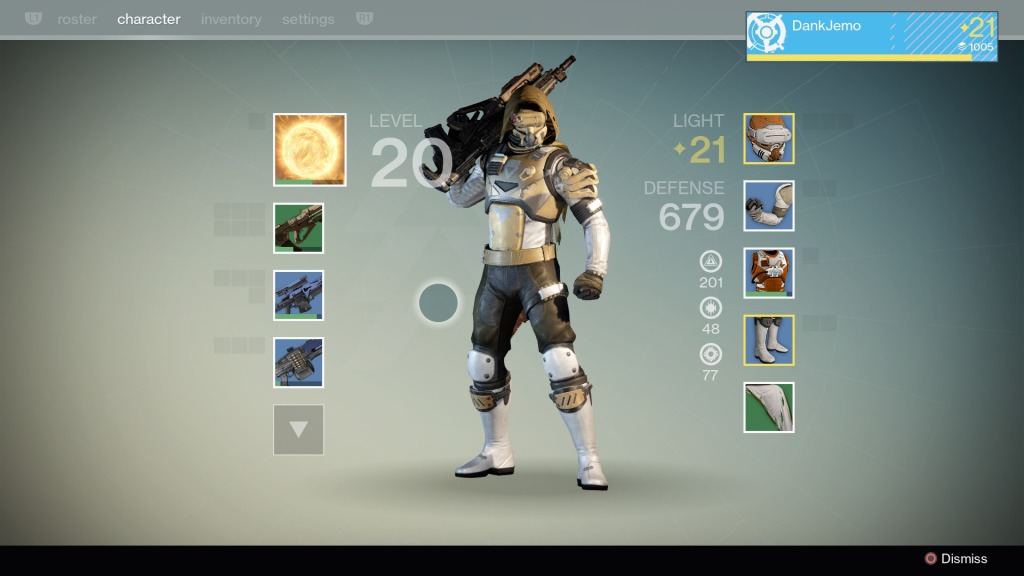 As a character progresses through the game it seems to become more restrictive towards their growth. This of course isn’t quite the case. It’s more accurate to say that as a player’s character progresses the constraints of the game become more apparent and affect the player much more directly. As an example, a character can only have two exotic items equipped at at time. One weapon and one piece of armor. Many people are struggling to understand this so obviously limiting design choice. In both single and multiplayer RPG’s, MMO’s and Shooters the goal is to get the very most out of your characters. This includes equipping the best gear and weapons as well as selecting skills that play into a gamers strengths. From a competitive standpoint this would almost make sense if Bungie were interested in keeping the PvP portion of the game more balanced, however there are countless games that allow players to wear whatever gear they want and still have a successful competitive gaming component. These choices don’t help players feel empowered, but restricted.

This design choice is also discouraging because of the sheer amount of time a player needs to put into those items to maximize their potential. It’s a waste of time to put hours or even days into getting the experience and resources required to upgrade the gear, only to have to either choose to not use it while upgrading another piece, or simply not upgrading more than one Exotic item and hoping you’ll be satisfied. While this isn’t a huge deal for weapons since players regularly switch their firearms around to fit the game’s scenario, it is a particularly rough design choice for a player’s armor. Players keep getting Exotic items, yet they can only have two at a time. This means the player has to choose to weaken themselves so they upgrade a new piece of gear while not wearing an item that took them a very long time to upgrade. The player can of course choose to simply not level another item and ultimately removing equipment options for the characters, but that’s just another limiting factor to the scalability of the characters. The decision to run the game like this makes players feel trapped within their own choices. Once you’ve moved passed a certain point, you need to ask yourself if it’s worth pouring that much more time without having any real advancement. or character growth. 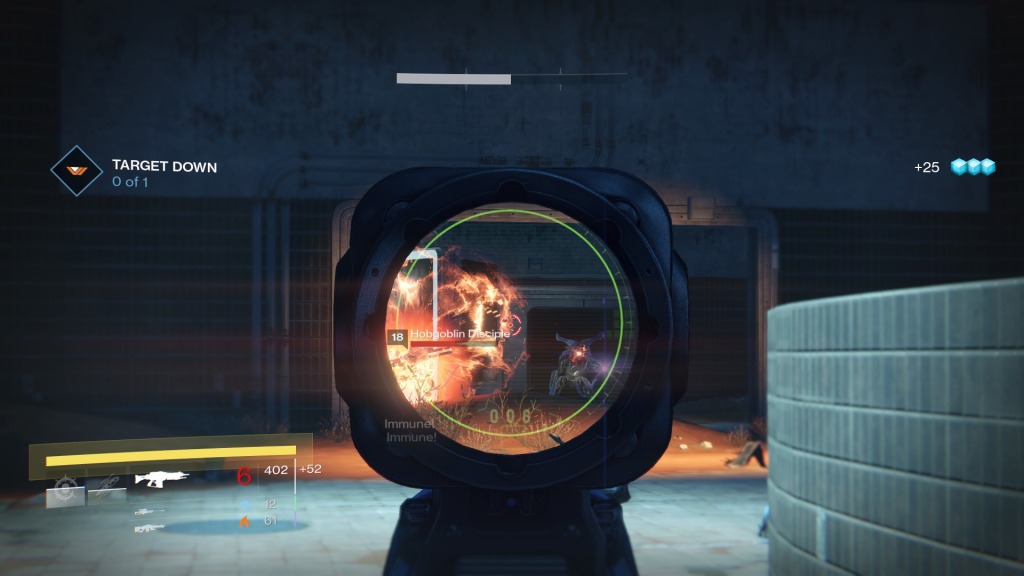 There isn’t enough content to sustain players and keep them interested for a long period of time. Most players are going to get bored of grinding the same strike and story missions well before they reach the max level of 30. There isn’t enough options to keep the player coming back. Even if they do manage to work their way up to max level it feels like a chore. Once they hit max level what exactly is left for them to do? Destiny was supposed to be about the “end game” according to Bungie. This claim made is plainly false by the time the player finishes the main story they’ve got very little to look forward to. Bungie claimed that the game truly begins after level 20, yet there are no new missions added at this point, no quest to be done that are unavailable to lower level players that actually tie into the main story. It’s all the same things the player’s been grinding through the entire time trying to get to the payoff. Yes, the player has a choice to select different difficulties, but there are no new instances or bosses. The only thing that opens up to a player at level 26 is the raid. While the raid is actually fun and does add a different cooperative dynamic to the game there’s only one. Players have in essence spent weeks getting from level 20 to level 26 in an effort to have a single new experience that is over in about three to four hours. One mission is not “end game” content, not even close.  Plenty of gamers fail to reach max level because there is simply no reason to. There is no new game content the player gets to experience for reaching the highest levels available. You simply play a harder version of the very same instance that’s been available since level 26. This is not what most gamers had in mind when Bungie and Activision announced and marketed Destiny. 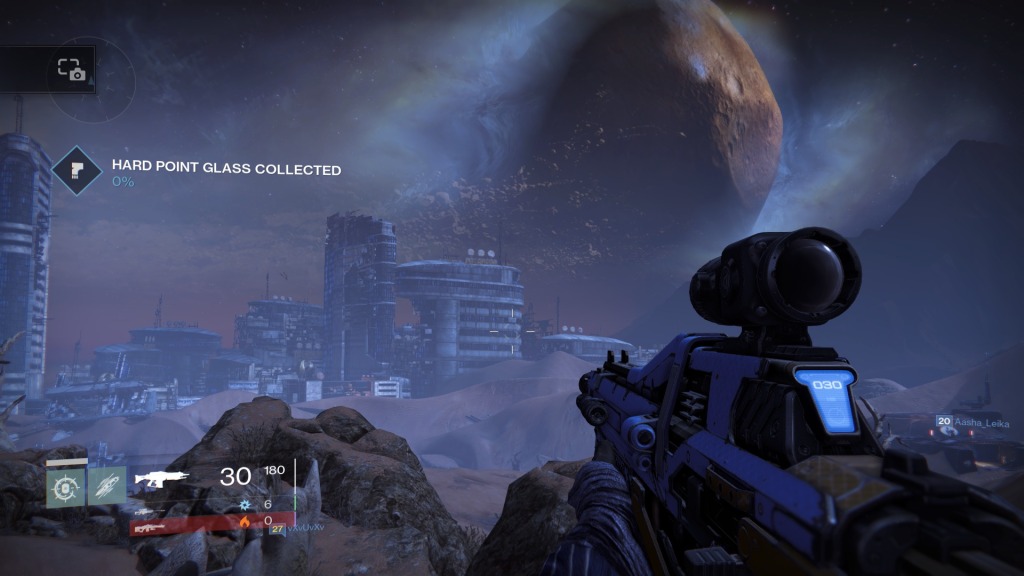 Bungie’s choice to have a single set of weapons stats for each gun in both PvP and PvE scenarios has really hurt the game’s PvP options. A common scenario that many players have complained about is spending all this time collecting items to buy special weapons from vendors only to have Bungie nerf the hell out of said weapon. While there is definitely some nerfing and balance issues that needed to and still do need to be addressed with Destiny, having a weapon use the same stats between PvP and PvE gameplay is a terrible idea. What you end up with is a weapon that players spent a long time trying to get and then almost as long upgrading to it’s full potential only to find out that it’s not nearly as affective as it once was in either PvP or PvE. This is a problem because at max level, players in a cooperative environment want to feel powerful and sometimes overpowered and unstoppable. This reduces that feeling of power and advancement through the game. While this is fair to pay attention to balance issues in PvP, Bungie could have easily had two sets of stats for gear. One for PvP and the other for PvE. It would have solved quite a few problems when dealing with the majority of players who like to engage in both arenas of play. In the end it makes the player feel like the reward for putting that much time into the game and it’s gear wasn’t worth the time spent.

In the end, Destiny isn’t a bad game. Not at all. It’s just not what was promised to the gaming public when it was being advertised. Bungie and Activision both deserve to wear a little egg on their faces for this release. They unfortunately let the marketing and hype-machine take control of the game and in the end didn’t deliver on what was being promised. Ultimately many players are left with a fairly enjoyable, but generic and forgettable experience. The game did do well enough to warrant a sequel. Hopefully the developers take not only the complaints to heart, but take a long time to look at where their own design missteps landed Destiny, choices like cutting major backstory out of the game in favor of strengthening their second screen features of the game and limiting equipment are some of the things Bungie needs to take a long hard look at moving forward or else Bungie’s new IP is destined to fail.