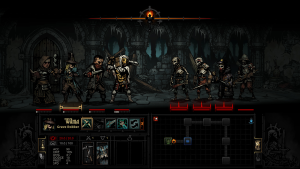 I sit writing this on the eve of Darkest Dungeon’s release. For the uninitiated, Darkest Dungeon bills itself as a hardcore dungeon crawler rogue-like in which you must restore your ancestral manor to its past glory.  Your party of heroes will face brigands, cultists, and twisted monsters that are intent on destroying their bodies as well as their minds.  You will struggle to maintain not just their physical health, but also their mental health as they accumulate stress and a variety of quirks and phobias that affect their performance.  It is a cool premise that reveals itself through somber and regretful narration that is well acted and leans heavily on the recent bubbling enthusiasm for all things Lovecraftian.  I say this somewhat dismissively, as I feel that many of those capitalizing on this trend have missed the mark by a wide margin.  Most of what we’ve seen recently has oversimplified cosmic horror by conflating it with schlocky oceanic tentacled monsters and the cults that worship them, but that’s a discussion for another day.  Darkest Dungeon deserves at least a little praise, as the idea of returning to your ancestral home to find that some unimaginable evil has taken hold is distinctly Lovecraftian, even if driving that evil out with the edge of your sword isn’t.

The theme of the game is carried quite well not just by the aforementioned narration, but also by some incredible hand-drawn art.  Your party of adventurers look like they’ve seen some shit, and the locales through which they will travel are blighted, ruined breeding grounds for bandits, cultists, and monsters that all look like they all belong to this twisted world.  Character models are detailed and well animated, and although there is only one unique copy of each character and enemy, they all have very memorable designs.  It would have been nice to see some more character models, especially for your party members, but at the very least the game gives you the option of doing some palette swaps.  Skillful use of camera pans and zooms give the action a dramatic flair, combining with crunchy sound effects that really make you tense up on every hit for that split second before you register the damage numbers popping off above characters’ heads.  It’s a nice looking game.

Where things start to come apart a little, is at the actual game. As I write this, Steam reports that I’ve played about 23.2 hours of Darkest Dungeon, which for me is on the high end for a single-player game that’s not a JRPG.  In that time I have raised a few heroes 2/3 of the way through the entire level progression and have seen the majority of the low-level bosses. There is actually quite a lot that I haven’t done in the game yet but I’m starting to question whether or not I even want to see that stuff after my experience thus far, especially because most of it appears to be just higher level versions of the same low-level content. 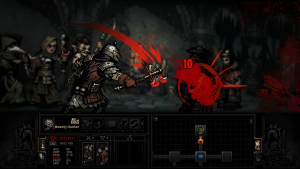 I should reiterate, before I continue, that my experience hasn’t been bad. The turn-based combat is sound.  The character classes are mostly interesting, and the sheer variety of classes and abilities mean that you can spend a lot of time just trying shit out and seeing what works.  The first couple of times I used a Jester, for example, I didn’t think he would be a great member of the team.  Get him in a boss battle and have him spam a party wide buff that stacks, and suddenly the Jester is looking like he has a place in my roster.  Discovering the use-case for each class in the game is a lot of fun, and raising a squad of hapless level zero nobodies into an efficient team is a blast.  It’s enough to keep you busy for about 15-20 hours, after which I think you will have seen all the game has to offer from a mechanical perspective, at which point your attention might start lingering on some of the games less refined aspects.

The first apparent problem with Darkest Dungeon, is that it’s not exactly what it claims to be. This is not a hardcore game.  It is difficult, but only because there is difficulty built into the dice rolls that manage the combat.  You can make good decisions to try and minimize the effect of the dice, but once in a while they will screw you regardless of how careful you are.  I don’t even have a problem with that. In fact, that’s one of the things this game gets right.  Often times the game feels unfair, and you have to take the shit hand it has dealt you and try to make the best of it.  Occasionally taking control away from the player by having a game system that promotes non-deterministic outcomes is one of the things that this game gets right.

Where it fails miserably and falls flat on its face is by not having any sense of consequence or urgency.  The dungeon isn’t doing anything to thwart your efforts aside from just existing.  In fact, you start to wonder why you’re even there at all. It’s not like the world is going to end if you don’t beat all the bosses by a certain calendar date, there’s always next week.  The game lacks tension because there is no time limit or drive to push your characters harder than you should.  If they need to take a week off in town to reduce stress of get rid of a disease or mental illness, no-problem, just take the B-team into an easy dungeon while your A-team recovers.  On top of that, every week (basically the time it takes to go into the dungeon once), a fresh wagon of recruits shows up that you can press-gang into helping your cause at no cost, so even if you do lose someone all you have lost is your own time.

I wish this was some veiled indictment of how meaningless the time we spend playing games can feel sometimes, or how pressure to be accessible and reach a wide audience can make even indie kickstarter games feel like checkbox ticking simulators (the literal progression in this game), but I know that it’s not and that just compounds my disappointment.  Once you realize that losing characters in the dungeon has no consequence aside from the time you invested, you see that the game is just a grind with level-checks built in. 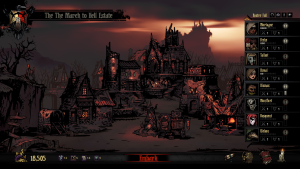 Everything you do is in service of making numbers go up or down, but the content governed by those numbers remains very much the same.  It has been bedazzled so that you’re gathering heirlooms from the dungeon to upgrade your town and heroes, but very little of it has a meaningful qualitative impact on the mechanics of the game.  It is made all the worse because the game exposes all of these numbers to you constantly and faithfully, so you know that upgrading your blacksmith with heirlooms will get you a 10% discount on weapon upgrades, the end result of which for me today was paying 1600g instead of 1800g to upgrade some weapons and armor.  You know that upgrading the plague doctor’s bomb attack will increase the chance to cause blight by 10%, and the blight damage by 1/round.  YIPEE!  The same is true of every single element in the game’s progression.

I feel like Darkest Dungeon would be a better if it took 30 minutes to play to completion and you never progressed beyond level 0.  You would enter a dungeon full of mystery with a party of heroes that would be drastically changed (or dead) by the end of your adventure, and along the way you might see 25% of the content that exists in the current game.  Instead, I’ve played it for 20+ hours and feel like I’ve seen it all over and over again to the point of fatigue.  It should, as I end here, be noted that the full release will have some additional content and even NG+ which supposedly includes the sorely lacking fail-state, and I’ll update this review as I see that stuff.  If there is a fail-state in NG+, it is a shame that you will have to finish the game once over to see it.  As it is, the game is flawed, but I’d still recommend it to someone who likes turn-based dungeon crawlers or any of its thematic elements.  If you’re on the fence, maybe just pass on this one or wait to see if it gets a meaningful update.

The full version of Darkest Dungeon is available on Steam  starting January 19, 2016.  This review is based on the latest version of the game in early access.